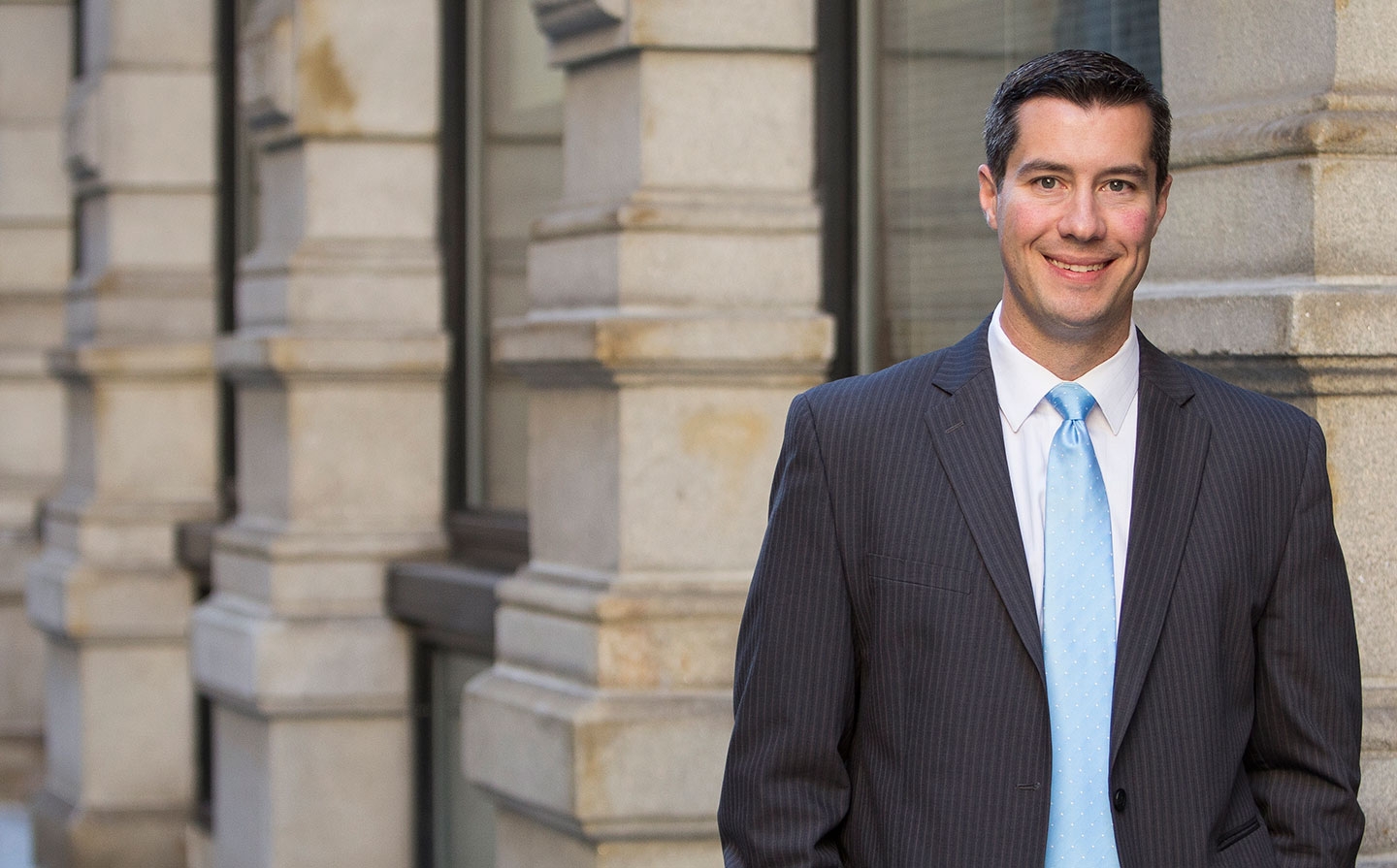 Michael Barkley is an experienced trial lawyer concentrating his practice on the defense of hospitals, physicians, oral surgeons, dentists, nurses, and other medical professionals in litigation and in matters before state licensing boards. Michael has successfully defended clients in Courts throughout the Commonwealth of Massachusetts and has obtained favorable jury verdicts in litigation involving claims of medical malpractice, breach of confidentiality, negligent hiring and supervision, premises liability, and general negligence.  Outside the courtroom, Michael has successfully defended clients in internal medical peer review proceedings, and he frequently appears before the Massachusetts Board of Registration in Medicine and Massachusetts Board of Registration in Dentistry.  Michael's practice also includes defending individuals and corporate entities in claims involving product liability, commercial litigation, and breach of contract, including advising medical professionals on contractual issues.

Each year from 2013-2021, Michael was selected, based on a vote of licensed attorneys in Massachusetts and a review by an independent blue ribbon panel, as a "Super Lawyer," a designation awarded to no more than 5% of the lawyers in Massachusetts and published annually in Boston Magazine and New England Super Lawyers. Previously, Michael was selected as a "Rising Star" each year from 2009-2012. Michael has also received an AV Preeminent Peer Review Rating™ by Martindale-Hubbell® reflecting the highest available rating by his peers for ethical standards and legal ability.  Michael was also selected for inclusion in the 2020, 2021 and 2022 editions of "The Best Lawyers in America," based on a comprehensive peer review selection process.

Michael is a frequent lecturer on behalf of hospitals, physician groups, and medical liability insurers on legal and risk management topics. Michael has also served as counsel for a legal hotline available to members of a nationwide organization of health and fitness clubs, and advises health and fitness clubs and professionals in the fitness industry on contractual and liability matters.

Practice Areas
Experience
Representative successful results obtained by Michael on behalf of his clients include the following:

Obtained a defense verdict on behalf of a Maternal Fetal Medicine Specialist in a Superior Court jury trial. The case involved a fetal demise at 22 weeks gestation. The plaintiff alleged that the defendant negligently failed to identify a prematurely dilating cervix on a limited ultrasound study performed 8 days prior to the plaintiff going into labor and delivering a previable infant.

Obtained a defense verdict on behalf of a hospitalist in a Superior Court jury trial.  The plaintiff alleged that the defendant hospitalist misdiagnosed symptoms of a cerebellar stroke as sinusitis and inner ear dysfunction, resulting in a delay in diagnosis of the cerebellar stroke and causing brainstem herniation and premature death of a 38 year old man.

Obtained a defense verdict in a Superior Court jury trial on behalf of an orthopedic surgeon in a claim in which it was alleged that the surgeon was negligent in failing to order a biopsy or additional imaging of a mass, resulting in a delay in diagnosis of Non-Hodgkin's Lymphoma.  The plaintiff alleged that as a result of the delay, her disease progressed to an advanced stage, limiting her treatment options and impacting her prognosis and life expectancy.

Obtained a defense verdict on behalf a primary care physician in a claim involving an alleged failure to obtain consultations and follow-up imaging that allegedly would have prevented the plaintiff from experiencing an ischemic pontine stroke.

Obtained a defense verdict in Superior Court on behalf of a surgical oncologist and a thoracic surgeon, in a case in which it was alleged that the defendants were negligent in the manner in which they positioned the patient on the operating table and protected pressure points, prior to a lengthy surgery to remove a chondroma from the patient's chest wall. Following the procedure, the patient was diagnosed with compartment syndrome of the thenar eminence of the right hand, allegedly as a result of improper positioning or padding, requiring multiple surgical procedures and allegedly resulting in permanent nerve injury.

Obtained a defense verdict in a Superior Court jury trial on behalf of an interventional radiologist. The case involved a procedure to declot an arteriovenous graft, during which the brachial vein was injured, allegedly resulting in compartment syndrome and injury to the median nerve.

Obtained a defense verdict in a Superior Court jury trial on behalf of an oral and maxillofacial surgeon in a claim involving an allegation of negligent pre-operative workup and negligent performance of a surgical procedure to remove a foreign body from the patient's antrum and repair an oral-antral communication, allegedly resulting in an acute postoperative palatal hemorrhage, five day hospitalization, multiple subsequent surgeries, and a chronic oral-antral fistula.

Obtained a defense verdict in a Superior Court jury trial on behalf of an ophthalmologist in a claim involving an emergency department consultation in which the plaintiff was allegedly discharged from the hospital with an improper medication, allegedly resulting in perforation of the cornea and need for corneal transplant.

Obtained a defense verdict in a Superior Court jury trial on behalf of a physician assistant practicing in a hospital emergency department.  The allegations involved a failure to timely diagnose, treat and obtain appropriate consultation for a cervical spine injury, causing a delay in spinal decompression surgery and resulting in permanent neurological deficits to the plaintiff.

Successfully represented an Ob/Gyn in an internal peer review hearing challenging a decision by a hospital's Medical Executive Committee to restrict the physician's privileges.

Obtained a defense verdict on behalf of a general dentist in a Superior Court jury trial.  The plaintiff alleged that the defendant dentist negligently failed to obtain her informed consent before performing an occlusal equilibration procedure.  The plaintiff further alleged that the procedure resulted in the development of temporomandibular joint disorder and myofascial pain, resulting in physical and emotional injury, and the need for substantial restorative dental work. Obtained a defense verdict in Superior Court on behalf of a Boston teaching hospital in a case involving negligent hiring, training and supervision of a former employee who allegedly disclosed plaintiff’s confidential medical information to a third party.

Recent lectures that Michael has presented by invitation include the following:

On September 21, 2021, at the invitation of CRICO, Michael again spoke at the Annual Clinical Fellows Retreat. Michael presented on legal and risk management issues unique to trainees.

On September 11, 2021, at the invitation of Boston University School of Medicine, Michael presented for a second time at the Radiology Interventions Safety, Quality, and Complications Symposium. Participation at this symposium included serving as a panelist to discuss legal issues during the "Complications Mastermind" portion of the program.

On September 14, 2020, at the invitation of Boston University School of Medicine, Michael presented at the Radiology Interventions Safety, Quality, and Complications Symposium. This Symposium, attended by interventional radiologists throughout the United States and internationally, was held over a three day period and was conducted virtually due to the COVID-19 pandemic. Michael’s presentation was entitled: “So…you’re Being Sued: What now?” and consisted of legal and risk management advice and data arising from interventional imaging based procedures.

On October 1, 2019, at the invitation of CRICO, Michael spoke at the Annual Clinical Fellows Retreat.  Michael presented on legal and risk management issues unique to trainees.

On September 28, 2018, at the invitation of Boston Medical Center and Boston University School of Medicine, Michael presented at an Obstetric Medical-Legal Conference.   The presentation was given with two other medical malpractice defense attorneys and focused on risk management and issues unique to medical malpractice litigation.

On July 13, 2018, Michael presented by invitation at OMSNIC and Fortress' biennial Defense Counsel Seminar held in Chicago.  The seminar was attended by OMSNIC and Fortress' national panel of defense counsel, as well as OMSNIC/Fortress' Board of Directors and claims staff - a group of approximately 150 attorneys, oral surgeons, and claims professionals.  The presentation was given jointly with an oral surgeon, and was entitled: "Anesthesia and the Oral and Maxillofacial Surgeon."